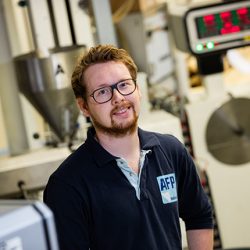 Sustainability. It is perhaps the most current topic in our society, and one in which plastics play an important role. I mean that in a positive sense, because plastics have a greater value than we are often aware of. But that value is only realised fully when it is used the right way. If this is achieved, a plastic product often fulfils a role that limits its impact on the environment! As a product developer at packaging film producer Trioworld, I have the opportunity to put this into practice, and I would like to show how.

A quarter of a human hair

Take a Load Security Film (or stretch film) as an example. A film that is only a quarter of a human hair thick is stretched up to four times its original length, before it is wrapped around a pallet of goods at high speed. This way you can transport a pallet of 800 kilograms of goods safely using only 200 grams of film. I am proud of that. Not only because you achieve something from a technical point of view, but also because it limits the impact on the environment (read: reduces). So the value of this film already lies partly in its contribution to reducing the waste of food/raw materials/products, by preventing transport damage with a minimal amount of packaging material.

But I believe more is possible. I want to take the next step, namely to make the actual product more sustainable. Fortunately, sustainability is an important issue within Trioworld, and our R&D team is given the freedom and resources to work on it. Last year, for example, we launched a study into the introduction of biobased raw materials in our Load Security Films. Our goal: to develop a film that finds its origin not only in oil, but also in sustainable raw materials.
Sugar cane is an example of one such sustainable raw material: it grows fast, absorbs a lot of CO2 and can be refined into a raw material for plastics. These biobased raw materials are certainly not bad in terms of quality, but they have not yet undergone the same development as their fossil brothers. Our challenge was to combine our high performance requirements (achieving high stretch percentages without fractures) with a high biobased content. This eventually resulted in the newest member of our Load Security Film family: Katan-Ex BB.

Due to the high incorporation of green raw materials (>50%), this film has a carbon footprint that is only a fraction (<10%) of its fossil counterpart. To illustrate: a traditional 17 kg Load Security Film roll has a CO2 equivalent of over 40 kilograms. Against this consider a roll of Katan-Ex Biobased, which is certainly not inferior in performance, with a CO2 equivalent of less than 4 kilograms of CO2. I see this as a new generation of sustainable film that deserves a place in the sustainable packaging solutions that are demanded.

Is that the end of the story? No. By continuing to develop, Trioworld can increase its contribution to a more sustainable future further, and hopefully also show the value of our products (and plastics in general). That is what we are going to do, and I would like to help with that.