Katan-Ex RP [Riverplate] The revolutionary 53-layer Katan-Ex RP [Riverplate] film offers security and protection, even for the heaviest and most irregular loads. This way your product always arrives at its destination in good condition. Increase your profit by reducing the consumption of materials and by increasing efficiency instead of incurring losses due to transport and other damage or reworking costs.

Thanks to AFP’s advanced micro-layer technology, products stay stable on the pallet with minimum film use, even for extreme loads and changing storage and transport temperatures.

Katan-Ex RP [Riverplate] is unique because it combines perfect pallet stability with consistency; the film can be wrapped 24/7 at high speed and without any failures, with a stretch far exceeding 325%. Even at these high speeds and sharp corners, the film does not rupture.

Our customers have realised savings of more than 20% with Katan-Ex RP [Riverplate].

Together with this film you can also order a fitting Topsheet.

Katan-Ex RP in the picture

To make sure that our film perfectly matches your requirements, our experts closely involve you in the selection process. Together we discuss the settings of your wrapping machine combined with the specific film properties and this way ensure optimal results. 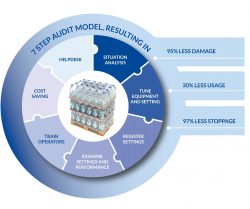